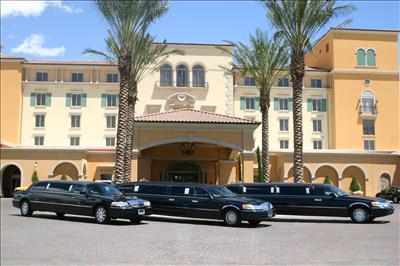 We always meet and greet in the airport. ODS is a personalized and professional Las Vegas limousine service. We employ the industry's most professional dressed, courteous and knowledgeable chauffeurs. Our immaculately maintained fleet vehicles is one of the largest in town. We are a family owned and operated business that has been servicing the Las Vegas area since 1960. Make ODS Chauffeured Transportation your first choice to take care of your special transportation needs, whether you're visting Las Vegas or other cities during your travels.

02/18/2020
Customer : E. Sims
"Polite and attentive, the Limos.com drivers are always top notch. Polite conversation, kept me informed each step of the trip, very attentive and helpful. I will never take a taxi again."

06/11/2019
Customer : S. Horowitz
"Driver was pleasant and courteous. Waited for 10 minutes for the driver to find me at the correct escalator landing."

06/11/2019
Customer : D. Zaremski
"Used Limos.com for my ride to the airport since 2012. Ride is always on time and the driver and car are always top notch. There are cheaper options but I can always count on the ride to be comfortable, the driver professional."

06/11/2019
Customer : P. Hirschboeck
"thought both trips went very well. I always use your service when traveling"

03/28/2016
Customer : L. Wright
"I have used this service a number of times but this time it was for a guest at my home. I had to change the time because we realized that the airport would most be likely crowed due to the Superbowl people leaving Vegas. It was no problem. The driver arrived promptly and took my friend to the airport. He told me that the driver was very nice and got him there with no problem. He commented that the service was excellent. I will certainly use you again!! "

03/28/2016
Customer : D. Varner
"In my past experience we have had a driver hold a sign so we knew where our car was, the event ended early so we had plenty of time to find him. We found/approached him before I had to text him. Our driver stated I never left a contact number even though I rec'd a text from you all.He also took another route (back streets but he passed our turn off) which is fine but when we said I think you have gone a little too far up the street he stated that we should have told him and made a snide comment about how he assumed we would know where our house was. I was not impressed with his attitude. We were polite but he seemed very defensive from the get go and not very personable. I still tipped him for the ride (even though it was included) but I think he needs to work on his people skills, It was not cheap for a one way drive that took 20 minutes so a little bit more friendly customer service would have made it worth it."

03/01/2016
Customer : C. Gorman
"He was there waiting for me as I entered baggage claim and was super. Knew exactly how to get to my home. A perfect ride. Thanks."

03/01/2016
Customer : B. Byrd
"ODS Transportation was great. My experience with Cheryl is always great and I try to use her for my transportation needs when I visit Las Vegas. "

03/01/2016
Customer : A. Strand
"My boss walked past a line of chauffeurs, none of whom had his name on the cards. He called the line to find his driver, was on hold for way too long and when he was finally able to speak to someone was told that they were having trouble contacting the driver. When he finally was able to find the driver, he was told that the driver was with the other chauffeurs that he had walked past earlier, which was not the case. I will not be using your services again."

12/22/2015
Customer : P. Grady
"I was confirmed for in-terminal pick up. When I came out of security, there were some drivers there... but none holding my name. So Plan A failed. I called the number they'd given me (twice) and they didn't pick up... so Plan B failed. Having failed both Plan A and Plan B, and having run out of options, the choices are (a) stand around waiting and hoping and (b) go get a cab. So I have no idea what their cars or drivers are like, because I ended up taking a cab. I called their number again while waiting in the cab line and no one picked up then either. "

12/22/2015
Customer : J. Trumble
"Colleen was exactly where she was supposed to be when I arrived. She was friendly and courteous and did a good job of getting me where I needed to go."

05/21/2014
Customer : W. Edwards
"The driver was perfect. I needed to get to a meeting immediately so he dropped my luggage off at the hotel and texted me the luggage tag. AWESOME!!!!"

05/01/2012
Customer : A. Klein
"The ride overall was good. This was a Prom date for 10 Seniors and the driver took advantage of the kids and dropped them off a half hour early. It has been vertiually impossible to rectify the overcharge several e-mails and phone calls. I will never use them again."

08/10/2010
Customer : S. Riklin
"Great service. The driver was excellent and very helpful in planning our stops around town. Will use again."

05/27/2010
Customer : J. R
"I was very impressed with Dan and John. Their communication was wonderful and my company trip went better than expected! Thank you!"

05/06/2010
Customer : D. Murphy
"Just wanted to reach out and express our appreciation for the fabulous job you and your team did in handling our high maintenance group."

04/22/2010
Customer : V. Johnson
"My wife and I would like to express our sincere appreciation to the service afforded to us by ODS on our recent stay in Las Vegas. We liked our chauffeur (Norm) so much after being picked-up at the airport, that we hired him and ODS to drive us around the area one day during our week long stay. He was terrific and the price was very reasonable. "

04/22/2010
Customer : J. Terveer
"We were picked up at the Venetian on 6-10-08 for transportation to the airport. Our driver was "Garrett". Soon after being dropped off at the airport we realized that 1 member of our group of 3 had left a bag on the van. My friend was rather upset and much to our surprise about 15 mins later Garrett was telling me he had found the bag and turned it into to the ticket counter. Garrett certainly went above & beyond my expectations and desrves kudos for a job well done!! Thank you. "

04/20/2010
Customer : A. H
"I just wanted to let you know that I had THE MOST positive experience with ODS this past weekend. All the drivers were professional and the greeters were on the ball. Honestly, this was the 4th conference we have done for the Bayer group, and Las Vegas was the most successful thus far! "

04/15/2010
Customer : K. Martin
"I wanted to take a moment to thank you & your staff for your recent assistance on our last minute program (also during CES). While it was a small transfer, the client had high expectations and your staff was especially helpful ensuring our program was a success. Lisa was patient and supportive when I had to make MANY changes over the phone; I truly appreciate that! "

04/15/2010
Customer : B. Meng
"I just wanted to thank both of you for a great experience during our YPO Forum retreat. The transportation was executed flawlessly and the drivers were very courteous and professional. I also appreciate the help with retreat ideas and introducing us to Sundance Helicopters."

04/14/2010
Customer : G. Rhodes
"I wanted to tell you what a great experience we had with our driver Bryan last night. He was very cordial and extremely prompt. He did a great job!"

04/14/2010
Customer : N. Gecht
"Thank you so much for all of your help yesterday. I can't tell you how much we appreciate it --- it's no wonder why my friend had such great things to say about ODS. The driver was very professional and courteous, and very patient with our filming schedule :)"

04/14/2010
Customer : E. Choo
"Just a quick note to say thank you for having David on the Mutual group program who coordinated the transfers to the satisfaction of the client and the specs that I focused on. The pick ups and returns went smoothly and without incident. "

10/09/2009
Customer : a. oddo
"Dear Nathen, I would like to let you know about the excellent service your mini-coach drivers provide to MERIN and our customers. They are always on time if not early. Since we are given their cell numbers by dispatch, we are able to speak with them when they arrive at a hotel to pick up our guests so that we can confirm the numbers on board before they depart and/or direct passengers to their vehicle’s exact location. The drivers are very courteous, patient and understanding when our groups are running late or finish early. Before departing they always wait for a MERIN staff member to release them even though many times passengers are pushing them to leave immediately. Often they have gone above and beyond by adjusting their routes, bringing back lost items and managing luggage left on their vehicles. They are all focused on providing excellent customer service. We at MERIN sincerely appreciate all of their efforts. Sincerely, Amy Oddo Executive Director "

10/09/2009
Customer : j. pari
"Dear Brad, This letter is to recognize and thank your staff for an outstanding job and impeccable service during the Kitchen and Bath Show held May 10-12, 2005. My dealings were mainly through Nathen Waldschmidt who put together the entire itinerary and then stayed on top of it with confirmations and constant changes provided by me and/or my staff. As asked for, the drivers contacted me with each pick up and drop off which put my mind at ease. The person you were transporting is the CEO of one of the largest companies in Europe and he personally came to me and said, “This is the best car service I have ever used”, besides the car service, Nathen also coordinated mini bus service as well as motor coach service and all were handled without a glitch. Please forward my sincere thanks to all of those who were involved, especially Nathen. Sincerely, Jim Pari President International Expo Service, Inc. "